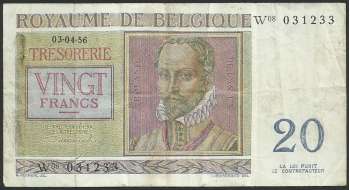 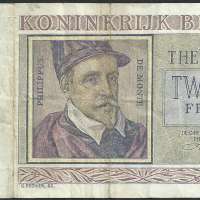 Was folded vertically into 4. The corners are still sharp and pointy.

The franc (French: Franc, Dutch: Frank, German: Franken) was the currency of the Kingdom of Belgium from 1832 until 2002 when the Euro was introduced into circulation. It was subdivided into 100 subunits, known as Centimes (French), Centiem (Dutch) or Centime (German).

According to National Bank of Belgium, Belgian 20-franc and 50-franc banknotes issued by the Treasury cannot be exchanged for Euro.