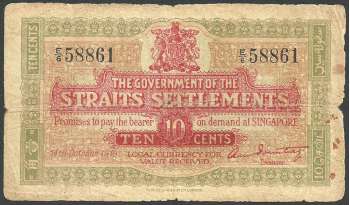 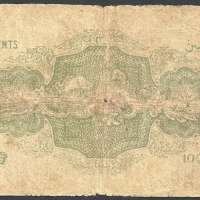 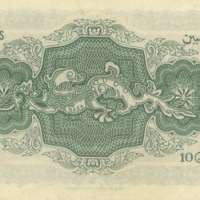 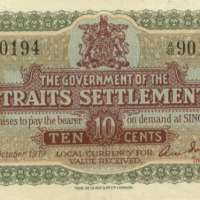 On the 5th October 1917, the Straits Government issued an official Government Gazette notice number 1313 (The Legal Tender Enactment 1913 and Amendment Enactment 1917) announcing the intention of issuing the 10 cents banknote to counter the shortage of coins in the Straits Settlements.

Second issue was to be used along side with first issue.

Despite the printed date of 14 October 1919 on the banknote, but it was only until 22 April 1920 it was put into the circulation.

These banknotes were printed on proper India paper and were engraved in London by Thomad de la Rue and Co, Ltd.

The serial number appears in black at the two top corners of the note.

On the back of the note appears the representation of a dragon in white and plage green.

Due to silver shortage, as most of the silver went to melting pot once they arrive in China coast due to the intrinsic value of the metal exceed the face value, the Government of Straits Settlements vide ‘The Legal Tender Enactment 1913 and Amendment Enactment 1917’ allowing them to issue Emergency Banknote with face values of 10 and 25 cents.

The locally issued 10 cents notes were extensively counterfeited and a great many of these forgeries circulated side by side with the genuine ones.

The Emergency Notes undoubtedly saved the situation but, even so, small change was often a great difficulty and postage stamps and tramway tickets were sometimes offered.

Exist only in one different signature variety.

Issued on 14 October 1919 along side with first issues.

The signature of the Treasurer of the Straits Settlement, Honorary Mr. A. M. Pountney, C.B.E..

Green and yellow as primary colours.
Coat-of-arms of Straits Settlements at upper center.
Folded into 2 vertically and 1 horizontally.
In poor to good condition. 3 major holes on the insection of folded areas.
Paper is slowly disintegrating.

THE GOVERNMENT OF THE
OF THE STRAITS SETTLEMENTS

Promises to pay the bearer on
demand at Singapore

On the back of the note is a decorative design of scroll work. In the centre a representation of a ten cent Treasury Revenue embosses stamp cancellation; all in red.

Excerpt from Chapter XVIII Decreased Use of Silver in Coinage (Silver Money by Dickson H. Leavens)
In the Straits Settlements, the rise of silver in the summer of 1917 brought currency troubles. The bullion parity of the dollar and the half dollar was 97 cents per ounce, and that of the subsiadiary coins was $1.083 per ounce. The price of silver passed the dollar parity before the end of August, 1917, and early in September passed the subsidiary-coin parity. The silver dollar had been replaced in circulation to a considerable extent by currency notes.
There was not only a large population of Chinese but also many Indian. Both classes took every opportunity to make small exchange profits. When silver passed the subsidiary-coin parity, they began to hoard the coins. By the beginning of September the sudden shortage of small silver was noticeable and was causing inconvenience to the public.
On October 1 the Legislative Council passed a bill authorizing the issue of 5-cent, 10-cent and 25-cent notes, legal tender up to $2. Locally printed 10-cent notes were issued before the middle of October and were helpful in meeting the needs of the public. At the same time some Chinese hoarders were prosecuted and given exemplary punishment. Meanwhile the price of silver receded to below the subsidiary-coin parity, so that it was only during September and October that the small-change question was acute.
The Government recognized, however, that the samll notes were only an emergency solution. Because of the widespread of notes instead of silver dollars and prompt action taken to protect the subsidiary coinage, the Straits Settlements passed through the wartime rise in the price of silver without any serious difficulty.

A big gratitude to Canggun Mendonan (Azman Alias) for letting me having a piece of this note in my collection. His help and patience is very much appreciated.