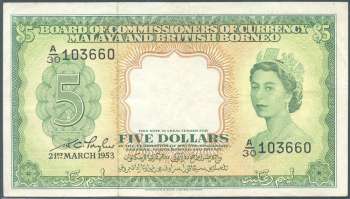 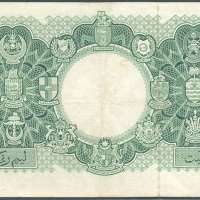 $5
BOARDS OF COMMISSIONERS OF CURRENCY
MALAYA AND BRITISH BORNEO

THIS NOTE IS LEGAL TENDER FOR
FIVE DOLLARS
IN THE FEDERATION OF MALAYA, SINGAPORE,
SARAWAK, NORTH BORNEO AND BRUNEI

BOARD OF COMMISSIONERS OF CURRENCY MALAYA AND BRITISH BORNEO ليم رڠڬيت

The jawi script was in old-spelling. The modern spelling is ليما ريڠڬيت
= Lima Ringgit (In Malay)
= Five Dollars (In English)