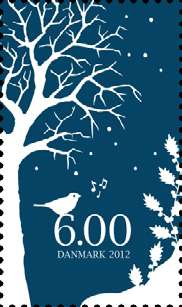 The three stamps feature motifs from a Danish winter landscape.

B.S. Ingemann's "The Snow Lies Heavy" (I sne star urt og busk i skjul) from 1831 is one of the most beautiful and famous Danish winter songs. In fact, Danish winters often have relatively few snowy days, yet we still enjoy listening to the little bird perched on a frozen branch as its song ushers in the spring. "The Snow Lies Heavy" inspired the three stamps issued by the Post Danmark on the theme of winter.

Song Illustration on the Stamps

All three stamps were designed by Ditte Rosenorn Holm, who trained at the School of Visual Communication in Haderslev and has worked as a graphic designer at Post Danmark, Stamps since 2008. About the process of designing the three stamps she says: "The old seasonal songs are about the most Danish things imaginable. When I was commissioned to design the three winter stamps, I immediately thought of B.S. Ingemann's 'The Snow Lies Heavy'. The three stamps are ment to illustrate the song."

Together, the stamps convey the passage of time, beginning with the dark winter morning (DKK 6.00), followed by the bright, frosty winter day (DKK 8.00), and concluding with a dark, cold winter night, with a full moon hovering above the treetops. "The tree is the only recurring fixed element," Holm explains. "The bird and bush vary from stamp to stamp. I've tried to keep the style of stamps very simple and timeless, so the viewer has to use his or her imagination to fill in the detail. "As well as the three stamps, Holm also designed other products for the same issue - the first-day cover, the first-day sheet, the presentation pack and the Christmas cards - all of which feature on the following pages.

6 Kroner is the minimum cost required for postal within Denmark for item less than 50 gram under the class B Èconomique.