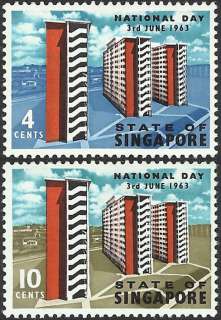 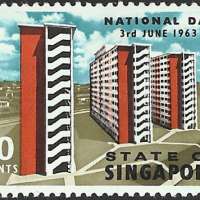 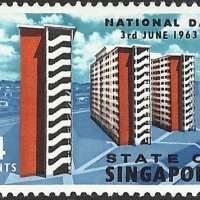 GENERAL INFORMATION
Country
State of Singapore
Type
Stamp (Complete Set)
Class
Commemorative
Front Inscription
3rd JUNE 1963 NATIONAL DAY STATE OF SINGAPORE
Issued Date
03/06/1963
Gum
Gum
IN COLLECTION CONDITION
Preliminary
Normal
Condition
Mint Never Hinged - Extra Fine
State of Singapore - National Day (1963)
In 1955 at the Legislative Assembly General Election, the Labour Front Party emerged as the most number of candidates elected. Its leader David Marshall became the First Chief Minister of Singapore. He led a delegation to London in 1956 to negotiate for independence of Singapore but failed. The reason was he was too soft with the communists. In 1954, the labour unrests led by the communists were so many that it was dubbed as ‘The Year of the Strikes’. The British government wanted him to deal with the communists first before granting independence for Singapore. He resigned upon returning to Singapore. Lim Yew Hock then the Minister for Labour and Welfare took over as Second Chief Minister. He began a series of suppression against the communists. The British government then had more confidence in granting independence. From 1956 to 1968, there were a series of ‘Merdeka Talks’ for Singapore. The British finally agreed to grant self-government to Singapore in 1959 under the New Constitution. The People’s Action Party had just won the 30 May election and Lee Kuan Yew became the Prime Minister. On 1 June 1959, the General Post Office issued this set of ‘The New Constitution’ stamps. Each stamp has the Golden Lion to represent the state of Singapore with government administrative buildings in the background. Queen Elizabeth II was still the sovereign head as defence and foreign affairs were still under her control.

On 3rd National Day 1963, a set of two stamps with the same 4 cent and 10 cent denominations were issued. It showed blocked of flats towering above the slums in the distance.