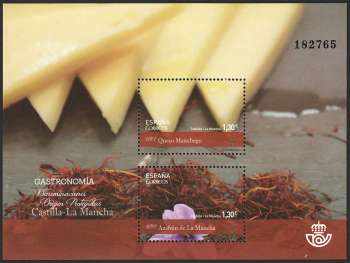 To say that a product is “designation of origin”, means that it is locally produced in a specific area, with unique environmental characteristics and that only a limited number of units are produced.

The producers who are included in the designation of origin make the commitment to keep product quality as high as possible and to follow production protocols.

There are regulatory bodies to ensure the regulations are complied with and to authorise producers to display the corresponding label for that category.

This year, Correos is continuing with its Gastronomy series by issuing a miniature sheet dedicated to the Protected Designation of Origin of Castilla la Mancha, where Manchego cheese and saffron are the star products.

Manchego cheese. Manchego cheese is made from Manchega sheep's milk, which are pasture-fed all year round. The cheese is matured for a minimum of 30 days, for small cheeses, and 60 days for the larger ones. It can be made using either pasteurised or non-pasteurised milk, although in the latter case, it has to be labelled as “artesano” [home-made]. This is a pressed cheese, firm and compact with a hard rind. Its colour ranges from white to yellow. It has an intense, easily identifiable aroma. It has a very characteristic strong, slightly acidic, taste.

La Mancha saffron Saffron comes from the stigmas of the flower of the same name, after they have been dried using a slow-flame toasting process.

It was introduced to the Iberian peninsula by the Arabs around the 11th century. The first written reference to the product dates back to 1720.

The importance of saffron in Castilla la Mancha is underlined by text books such as El azafranero práctico [Practical saffron farming] by Jiménez Martín, and has even given rise to its own particular vocabulary, collected in works such as El léxico del azafrán en el habla manchega [the lexicon of saffron in La Mancha speech]. La Mancha saffron is considered to be the best in Spain and one of the best in the world.
COMMENTS
NEW COMMENT