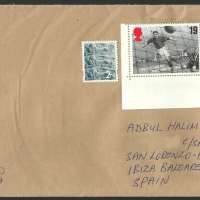 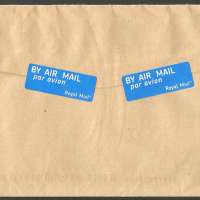 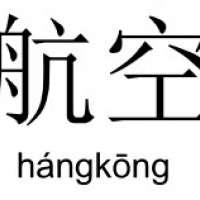 Postal cost as per stamped:

Total is 74p whilst the correct amount for postage from UK to Spain in 2013 was 88p.

On the reverse, 4 different AIRMAIL flash labels were used. Two varieties, one of Royal Mail and the other is from Hong Kong.

With five wavy lines on the right side.

THE Royal Mail is to issue first and second class stamps without The Queen's head for the first time. Four new designs will be on sale at more than 14,000 post offices across England from April 23 - St George's Day.

The new set, approved by the Queen, feature images of the Crowned Lion of England for first class stamps and the Three Lions of England for second class.

Three Lions of England
This stamp portrays the traditional Three Lions of England as depicted on the shield of England. King Richard I, Coeur de Lion, had his second Great Seal made, around 1198, showing three lions passant guardant in pale. This device has been borne by English monarchs ever since.

William Ralph "Dixie" Dean (22 January 1907 – 1 March 1980) was an English footballer. Dean began his career with Birkenhead-based Tranmere Rovers before moving on to Everton (the club he had supported as a child), where he became the most prolific goalscorer in English football history. Dean played the majority of his career at Everton before injuries caught up with him and he moved on to new challenges at Notts County. He is best known for his exploits during the 1927–28 season, which saw him score a record 60 league goals.

A statue of Dean was unveiled outside Goodison Park in May 2001. A year later, he became one of 22 players inducted into the inaugural English Football Hall of Fame. Dean was the first Everton player to wear the number-9 shirt, and is regarded as one of the greatest pre-World War II athletes in Britain.