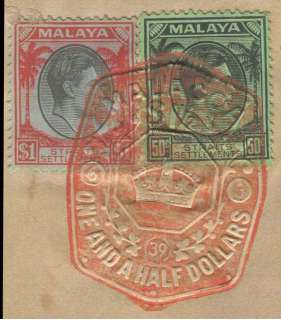 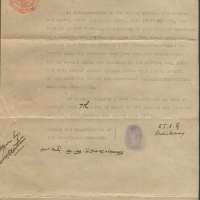 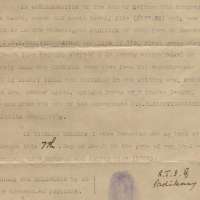 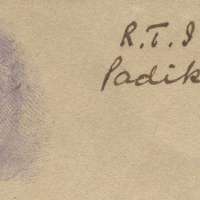 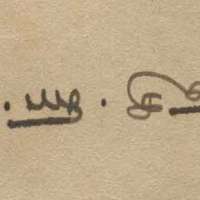 These two were used as revenue stamp.

Die II - Printed from a single plate. Lines of background separated from central oval by a white line. Foliage of palms does not touch outer frame line. Palm frond in front of King’s eye has one point.

The date the document was sealed appears on the seal itself and it was on 6 March 1939.

IN CONSIDERATION of the sum of Dollars One hundred
and twenty seven and cents twenty five ($127.25) only now
paid to me the undersigned PADIKASY of Kubu (son of Kannappan)
by P.C.K.KASIVISVANATHAN CHETTIAR of 115, First Cross Street
Malacca (the receipt whereof I do hereby acknowledge) do
hereby SELL and TRANSFER over free from all encumbrances
all my RIGHT, TITLE and INTEREST in one Milking Cow, Black
and Grey colour mixed, upright horns of 2 inches length,
To and Unto the use of the abovenamed P.C.K.KASIVISVANATHAN
CHETTIAR absolutely.

IN WITNESS WHEREOF I have hereunto set my hand at
Malacca this 7th, day of March in the year of our Lord one
thousand nine hundred and thirty nine (1939).

1. Need to find the Tamil characters and its meaning.
2. Identify note and signature on the left side of the document.
3. How to calculate the rate tax rate?